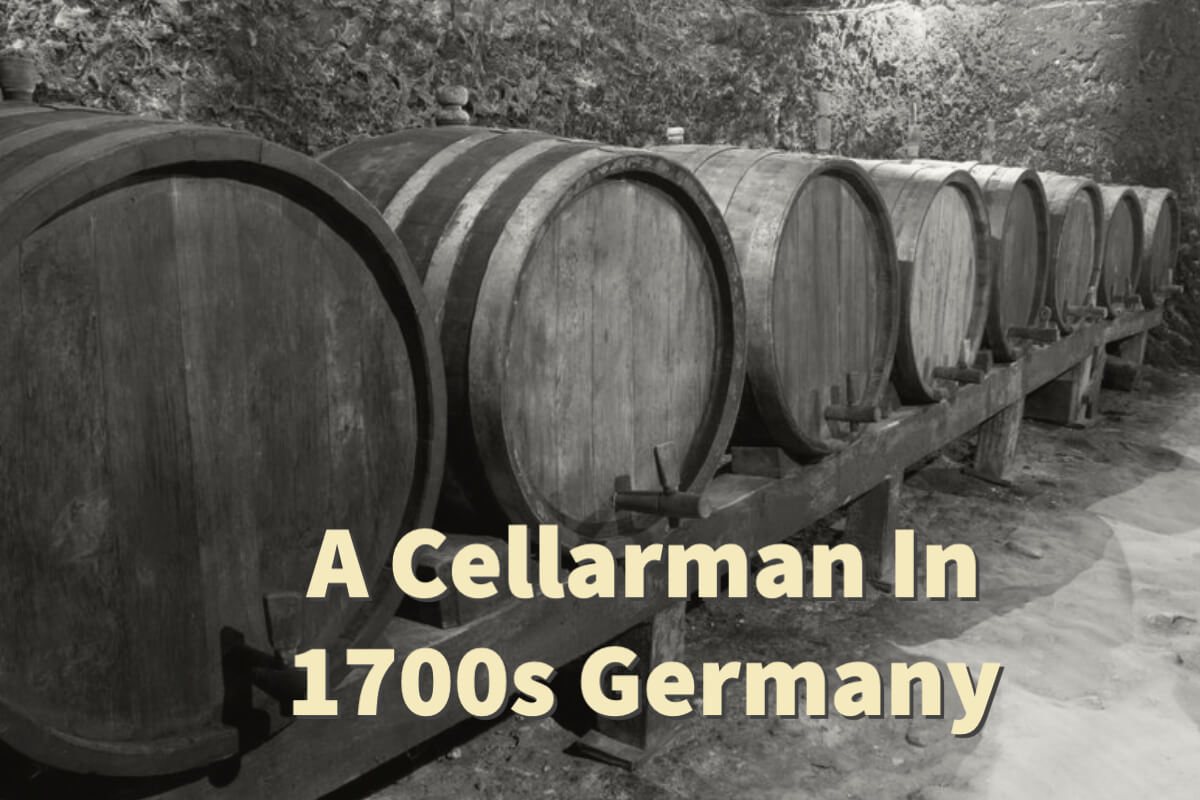 My great grandfather Wolfgang Gaistdorffer was born about 1730 in Grossapach, Germany, which is in the state of Wurttemberg. Germany. Parts of this area of Germany are still producing wine today.

What Is a Cellarman?

But there is another definition of a cellarman that is still also used. A cellarman is a person who handles the supply in a pub or restaurant of all the alcoholic beverages. In other words, someone who works in the wine cellar and takes care of all the wine and beverages in the cellar.

Brief History of Beer and Wine in Germany

Many people, especially some rich gentlemen, would build private brewhouses to brew their own beers. A cellarman would have been needed to work in those brew houses to either help ensure the quality of the production of the beer or to watch and guard the beer and move it when needed.

Germany also produced a lot of wine. The area where my relatives lived is near many of the wine-growing areas of Germany.

Germany started to produce wine about 70 to 270 AD, so Germany has a very long history of wine production. In fact, it was the Romans who brought wine production to Germany.

During the Roman conquest of Germany over 2,000 years ago, the Romans introduced to Germany winemaking. Monasteries became the center of the wine culture, and wine was the drink of almost all people throughout the middle ages.

It was the production of beer in Germany that ultimately helped the decline of wine in Germany. In the 1500s, due to climate change and improved brewing methods, vineyards in Germany decreased as beer production increased.

There are 4 such large vats or barells in the history of the Heidelberg; one of the large vats at the Heidelberg castle was built in 1751. The vat has a capacity to hold 221,726 liters or 58,574 gallons of wine. Over time the wood has dried, so the capacity for the vat has gone down slightly.

The German builders used 130 oak trees for the construction of this huge vat. And because it is such a large vat, it has rarely been used but has largely remained empty.

The American author Mark Twain said this of the Heidelberg tun:

It is more likely that my great grandfather worked with wine than beer because of where he was located in Germany. He could have worked at a vineyard and looked over the vat as the Heidelberg Tun or worked for a brewery and looked over their beer production; we do not know exactly where he worked but just that he worked as a cellarman.

But here is what we can suppose that a cellarman would need to be successful in their job, even in Germany in the 1700s:

When you think of the role of a cellarman in 18th century Germany, you may think it is a low-level job or occupation, but the truth is that this job would have been an excellent career. A person would have needed some knowledge, education, training, and trustworthiness to do this job.

The Hummel Family is a blog about genealogy and finding our ancestors. We would love to have you be part of us by joining our newsletter and our community. You can sign up for our newsletter by clicking here.

What Does Swabia Mean?

You can learn more by reading What Does Swabia Mean? About Swabian German by clicking here.

You can learn more by reading A History of Westphalia, Germany by clicking here.

link to Valuable Lessons We Can Learn From Our Ancestors

One of the great blessings of genealogy is that we can learn many valuable lessons from our ancestors. When I genealogy, I have been amazed at how much I have learned from my ancestors that I...